So I used tweener to move mercury once around the sun, but Nick wasn't satisfied with the way it was working so he used a file downloaded from "FLARmanager" that did the same thing as our borrowed "simplecube" but did so by extending "sprite" instead. What the hell is sprite? We're figuring that out, its used to display graphics in flash somehow, but whats handy is it has a method called "moveobject." We discovered that each object that's displayed is held within a "container", and that by moving these containers ("basenode" in the original code for simplecube was itself a container), you can move the objects they "contain".
Long story short, with some sin/cos tricks and by getting variables from an imbedded timer called "getTimer," the planets in our solar system not only move around the sun, but do so at the correct relative speeds. Gotta give this one to Nick, I made them move but he made them fly.
Get Hyper baby: 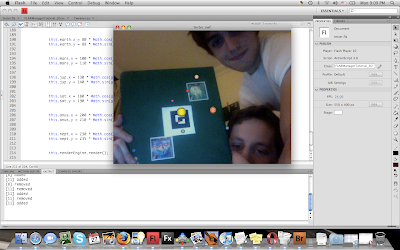 Off for vacation in Aruba for two weeks, hopefully the project doesn't suffer. It feels good to have gotten this far.
-Brendan
Posted by Dr. Cosmos at 10:06 PM